I am in two minds, whether to name this blog “chip out” or “cheap out”. I leave it to you to decide at the end.
Chip out in the context of woodwork is the phenomenon of the edges of laminate becoming irregular or jagged during a cutting operation. 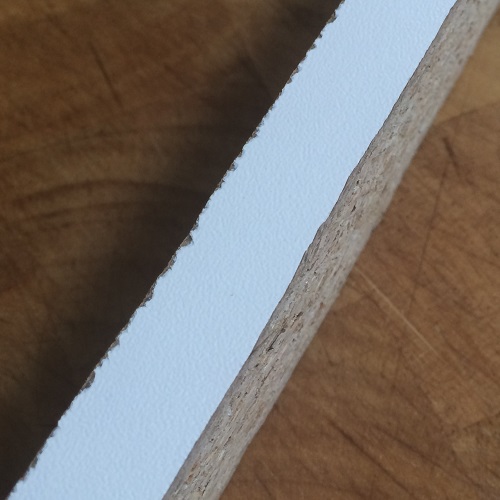 This is typical of furniture made by carpenters using hand tools, irrespective of which state they come from (Rajasthan or others). The problem is with process and not with the person. Carpenters usually cut a laminate using a handheld saw (separately or after sticking two of them to both sides of a board such as plywood or MDF). When the teeth of the saw comes out of the laminate, some material along the edge gets peeled off in an irregular manner. This is what is known as chip out. In case the cutting is done after sandwiching a board between two laminates, the top laminate into which the saw teeth enter will be cut clean. However, the bottom laminate, from which the teeth exit will experience chip out (like the exit wound of a bullet). This is inevitable as long as a single blade saw is used. You need not worry, this won’t happen in our work. Wondering why ( or how )?
The secret is in the process… In our cabinets, the laminates are cut after sandwiching then to a board(usually plywood). And they are not cut by hand saws, but rather in sophisticated machines. These machines have two blades, one for cutting and the another smaller one called scoring blade situated before the cutting blade to cut the laminate on the bottom side, before the cutting blades teeth exits from that surface. Since the laminate is scored our cut by another blade, the cutting blade will not create an exit wound or chip out in that laminate.

Laminate is one of the cheapest but most versatile materials available today for interior design. However, if we try to go with a traditional carpenter for further (apparent) cost savings, the result is chip out… That will be in addition to material waste due to unplanned cutting, damage to your floor, walls etc due to moving, cutting, sticking etc and time waste due to manual operations. Don’t forget to add number of extra EMIs you have to shell out while still paying rent because of this time delay, when doing your calculation to decide between a traditional carpenter or a reputed company like us, who can deliver a better modular kitchen or wardrobes, much faster and without any mess. I leave it to you to decide, whether to experience chip(cheap) out or not…

One thought on “Chip out..”